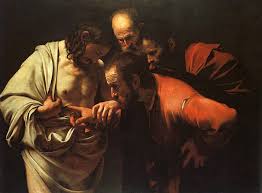 In a world that refuses to accept reality until it is verified by the senses and empirical science, transcendence becomes passé, spirituality is useless and religion is empty.   Doubting Thomas lives on until this  time with his legacy of skepticism which refuses belief until proven by  physical experience.

Whether we accept it or not, we are born natural skeptics!  We do not want to appear naïve or credulous to other people and to simply believe in hearsays, unfounded stories, cheap gossips and unverified reports.  In a way natural skepticism is healthy because it protects us from falling into the pit of the gullible but it has its own limitations.   All of us are standing between the real world and the boundless mystery that beckons to be explored but our human limitations bow in humility to understand and capture the unknown.
Thomas as an Apostle and representing those men and women in the later generations demanded a proof:  “Unless I see in his hands the print of the nails and place my finger in his side, I will not believe.”  When Christ appeared and agreed to Thomas’ condition, Thomas did not even dare to do the physical examinations, he said “My Lord and my God.”  It was an expression of affirming both the humanity (my Lord) and the divinity (my God) of Jesus Christ.  Now henceforth he would be representing all those peoples in later generations who without experiencing Jesus in the flesh will profess such profound faith. “Blessed are those who have not seen and yet believe.”

The belief in the Resurrection was not founded in the empty tomb but rather on the testimony of those who encountered the Risen Christ through the many resurrection stories which have been handed down through generations until they reached us and shaped our belief.  The story of Thomas is the story of us all.  We have moments of disbelief when we demand for proofs of the presence of God most especially in times of darkness and fear.  Often times there are no proofs given other than the invitation for a leap of faith to embrace God in the realm of the unknown.    We can never capture the sense of the mysticism and mystery of God unless we let go and simply believe like Thomas did!

The celebration of Divine Mercy Sunday is not just about a devotion entrusted to St. Faustina and was made a universal feast of Pope John Paul II.   Rather it brings us back to that mystical event on Calvary.  When Jesus died and his breast was pierced with a lance, the heart of God was opened inviting all humanity to enter into the immensity of God's mercy.  The Church was born from the heart of Jesus beneath Calvary!   Mary and John representing the Church which was now the New Humanity, received the two great sacraments of Baptism and the Eucharist symbolized by the water and blood that flowed from the heart of Jesus.  But only those who profess their belief, like Thomas, can enter into the heart of God and bask in the unfathomable mercy of God.
Posted by Fr. Vladimir Echalas, SOLT No comments:

WELCOME TO MY BLOG!

Blessing from Rome!
Thank you for visiting my blog! It is my joy and honour to break open the Word with you... the Living Word who continues to speak to us as he re-creates us unto his image!
If you find this blog helpful to you, kindly share it to your family and friends!
Fr. Vlad, SOLT

Please email me for your comments or questions:
frvlad3@yahoo.com

Fr. Vladimir Echalas, SOLT
Pontificio Collegio Filippino, Rome, Italy
A member of the Society of Our Lady of the Most Holy Trinity (SOLT)

If you love POETRY and PHOTOGRAPHY, you can also visit my other blog:

Listen to the recorded homilies at the Australian Catholic Radio Online:

THANKS EVERYONE FOR FOLLOWING THE WORD!

FOLLOW BY EMAIL: New posts will be sent to your email.